At least do the little things right 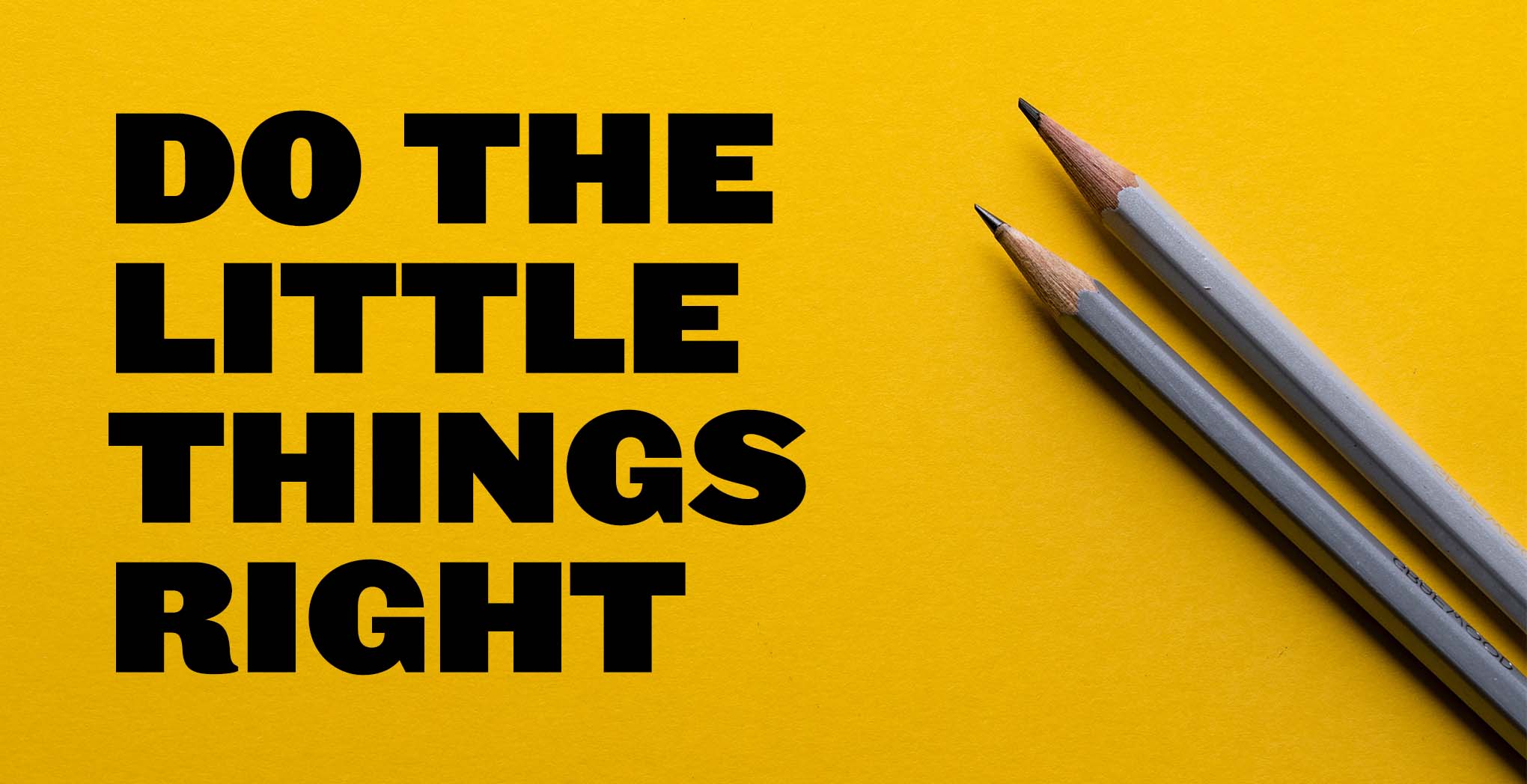 There’s an old saying popularized by former President John F Kennedy, “victory has a thousand fathers, but defeat is an orphan.” While he was referring to the phenomenon of countless big and small contributors coming out of the woodwork taking credit for good things and saying “never knew ‘em” to failures, this phrase also carries meaning in the actual creation of those victories. A thousand things must go right to get to that win. A thousand little things allows for the one big thing.

When we were building our agency, we were almost always the little guys going into the pitch, constantly the underdog against big firms, entrenched incumbents, or even just a friend-of-a-friend who was promised the gig. We were knuckle-headed kids with little experience but lots of energy who somehow would find our way to get that foot in the door. We would have a shot, but we had to play mistake-free ball.

Fortunately, that’s the one thing we could always control. We can’t do anything about the other guys, but we can make sure that we would do all the little things right to put us in a place to win. The crazy thing was, every time, I was blown away by how much everybody else doesn’t do this.

In building a business or shaping your career, if you just do the little things right, you’ll be ahead of almost everybody. You don’t have to be the most brilliant or talented expert, you just have to care. Here are some examples:

This one hits close to home as somebody whose last name routinely loses the second “N” in my journey through life. (I joke that my memoir will be titled “Two T’s, Two N’s: The Story of a Misspelled Life.) But this doesn’t just happen with funky last names, I’ve seen my colleague Jonathan be called Jonathon countless times, and I’m pretty sure that we had a client that thought my other teammate Vlad’s name was Vald for about two years.

Dale Carnegie hit on this when he wrote “Remember that a person’s name is to that person the sweetest and most important sound in any language.” If you make the mistake, you might think it’s no big deal. But when you’re on the receiving end, I guarantee you’ve noticed each and every time when your name is the one spelled incorrectly. This detail is even more important if you’re in marketing or communications, where your literal job is to look after and promote the name of your client.

Stick to a style

If you work at a magazine or newspaper, you likely have an in-house style guide that dictates how you format, spell, or refer to certain things. Do you write out street names or abbreviate them? Do you refer to somebody with a title or just their last name?

In your own life and business, it helps to have some of these rules for yourself to standardize your messaging. You don’t have to go crazy here, but it makes things easier and more polished to internally standardize how you write common business language, like “AM” vs “A.M.” vs “am” vs “a.m.” for a time, as well as terms specific to what you talk about a lot, such as “best seller” vs “best-seller” vs “bestseller.”

Nothing zaps the energy from a relationship like sending eight emails back and forth to schedule a simple call. Tools like Calendly can help make this slog super simple, but they come with some awkward baggage of weird power dynamics — you wouldn’t send your Calendly link to a big shot executive for instance.

For those scenarios where it doesn’t work, it is better to be proactive. Provide 2–5 windows of time, on multiple days, and outline the times in that standardize style referenced above. If people are in multiple time zones, make sure you clearly label your time zone and consider putting their time next to it in parentheses. If you are meeting in person, suggest a couple location options from the get-go to avoid that extra volley. And finally, when you send an invite, put your name or company first in the event title so that it shows up first on the recipient’s calendar and they don’t have to click in to see what meeting is in their truncated view window.

For the love of all that is good, follow-up

At meetings, events, conferences, or wherever, I have met thousands of great people over the past few years (well, prior to 2020, but that is a whole other thing). When I am sitting at my desk the next day with those new business cards, I’ll spend a couples minutes checking out their work, send a quick note saying “nice to meet you” and maybe offer up any connections or resources that might be of interest to them. Then, for most of those messages, they go into a black hole, a place devoid of space and time.

The simple manners of saying “hello-nice-to-meet-you-good-luck-bye” are apparently not so universal. But you know who nearly always responds? The people you would least expect: CEOs, top executives, media leaders, and other VIPs. The busiest, most successful, most admirable people I know are the ones that respond to those who connect with them. Maybe it’s pure chance, but maybe there is a connection between reaching out, building relationships, and doing big things.